I was a contact lens/glasses wearer for over 16 years before finally undertaking laser eye surgery in December last year. I had toyed with the idea for a while and finally went for it. I’m thoroughly pleased with the end results and wish I had gone for it sooner. What follows are my own experiences and thoughts which may be valuable if you’re considering laser eye surgery too.

Quick disclaimer: I’m clearly not a qualified expert. Speak to a professional. Your mileage may vary.

I had heard about the risks. You could go blind. They fire scary lasers into your eyes. It hurt. After many years of placing little bits of plastic onto my eyes almost every day I wasn’t squeamish, but I would be lying if I said I wasn’t intimidated by the procedure.

I also knew that laser eye surgery may not result in perfect, Tiger Woods level 20/20 vision and that there was a risk of poor night vision among other side effects. The risk of going through the pain and stress and still needing to wear contact lenses or glasses was offputting.

And of course, despite the advertisements quoting prices of (from) £395 per eye, I was sceptical and believed the cost to be around at least twice that. The risks of blindness and of spending such a large amount of money and it not being wholly satisfactory meant it was easy to dismiss the idea.

I’d love to say there was a life-changing moment which pushed me into finding out more. In reality, it was the increasing discomfort from wearing contact lenses all day. My eyes were often sore in the evening and getting worse from staring at computer screens in an air-conditioned office. Nights out ended in blinking Barry trying to get moisture from tears to lubricate my contact lenses.

So I did some research. I thankfully didn’t trawl YouTube to find horror videos of surgery (don’t do it), but I did enough simple Google searching and reading to be satisfied that success rates and satisfaction was high. Laser eye surgery is now wholly normal and mainstream.

I searched for reputable companies near me, including Optimax, Ultralase and Optical Express, and picked the latter. It looked professional from the website and it was nearest me. Don’t underestimate closeness as a factor: you will need to make a number of visits for pre and post check-ups.

I booked a visit to Optical Express in High Wycombe on 9 October 2010. First impressions were that it seemed professional and the clinic appeared smart and clean. This was important to me. I really didn’t want to be seen or operated on in the back room of shabby side-street shop.

I was short-sighted and so my long distance vision was poor. My prescription was approximately -3.5 in each eye. This was fine for the procedure and with a relatively low prescription, I had a lower risk of night vision glare or haloing.

The optometrist was convincing. After a series of questions and measurements, including anaesthitising my eye and probing it to measure the thickness of my cornea, her recommendation was for standard Intralase LASIK. She explained that with Intralase a second laser is used to cut a thin flap in the cornea rather than require a surgeon to use a blade.

The alternative method we discussed was LASEK: instead of a flap, a thin layer is removed from the eye’s surface. I was told this requires a much longer recovery time (up to a week) and is significantly more painful. I rejected this fairly quickly. I wanted to go for the best option recommended to me with the least pain and discomfort.

Among other warnings and precautions I was given, she stressed the fact that old-age long-sightedness will still affect me and may even begin slightly earlier.

Leaving the surgery I was given my quote. Total cost, including eye drops and check-ups, was £2,400. More than I thought, but reasonable.

Thinking back, maybe I could have asked for a discount or haggled in some way – the optometrist’s sales technique was fairly sharp and I’m sure they work on margin – but I feared some sort of lower quality or reduced service. Ridiculous, I know.

I went home to discuss with my other half, Laura, and think about it. It didn’t take long to decide.

After the consultation you get gently chased to make your decision. I didn’t have any further questions or reason to prevaricate any longer and so the following week, gulping, I paid my deposit. 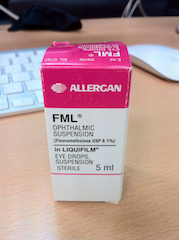 I initially booked my surgery for 13 November 2010 and was told to stop wearing contact lenses on 24 October to give my eyes time to breathe. I was told my eyes were quite dry during the consultation. This wasn’t a surprise to me, but the optometrist insisted that the dryness would need to clear up before surgery.

This meant using eye drops and returning to wearing glasses for the first time since secondary school. Few work colleagues or friends even knew I was short-sighted. I could handle putting in drops every few hours, but hated wearing glasses again. I overcame my childish vanity by reminding myself I would only have to endure glasses for a couple of weeks.

In fact, my surgery was rescheduled three times. My eyes were just too dry to proceed and so I was given a series of new drops to try, including the fabulously-named FML (see photo, right).

The delays were frustrating, but I wasn’t going to argue with the optometrist if she thought surgery was too risky while my eyes were dry. Patience.

I finally got the go-ahead to book surgery for 18 December, a Saturday, at Optical Express’s Harley Street clinic. After surgery someone needs to help you get home and I was told you need 48 hours recovery time afterwards. I booked the Monday off work to be safe.

Booking a clinic located on Harley Street (famous in London for private surgeries and specialists) was reassuring, even though it was theoretically the same as any other OE centre.

My day of surgery was in the middle of a period of heavy snow in London. My car needed to be pushed off ice on the way to park near the station, trains were cancelled and we wondered whether we would even be able to get back home after. Not the best preparation, but the saga helped occupy my mind. We were on time.

After a short wait and a couple of pre-checks with the surgeon, Mr Manek Patel, I was brought into the theatre. I was laid down, my eyes were aneasthetised and I waited for him to return. My heart was racing as you might expect.

And then the procedure began. One eye at a time. Suction clamps were put on my eye to stop it moving, my vision went grey, the intralase laser fired, ptt-ptt-ptt, surgeon folded flap back, I’m moved to the next machine, suction, corrective laser fires, ptt-ptt-ptt, flap put back, antibiotic drops, vision returns. Next eye. Repeat.

It was all over in minutes. Even though the suction clamps stop your eyes moving, I’ve never held myself so still! You feel nothing at all, although there is a smell of burning as the laser reshapes each lens.

I was moved to a darkened waiting room and told my eyes would weep a bit. Carefully testing my eyes out I convinced myself I could see distance correctly. Then I shut them again. A few minutes of recovery and then I could leave – with sunglasses to protect my light-sensitive eyes.

The journey home wasn’t fun, but not for surgery-related reasons. You’re encouraged to return home as soon as possible and sleep for a few hours. The snow meant we couldn’t find a taxi, trains were sporadic and then no taxis at Windsor. Trudging through the snow when you’re half blind and disorientated isn’t fun. Thankfully I had Laura’s help.

Back home, I put on my new goggles, intended to prevent you knocking your eyes accidentally. I wore these for the first week in bed at night, much to Laura’s amusement. You’re also given milky steroid and antibiotic drops to put in 6 times a day. No pain or real discomfort, although I took Ibuprofen for the first couple of days to be sure.

The day after surgery I had the required 24-hour check-up. All was healing well and I apparently had better than 20/20 vision! I could even drive home if I wanted (I didn’t). Gingerly using my eyes over the Sunday and Monday I then returned to work. Computer displays were a bit bright, but otherwise I could see normally. Driving at night was also fine.

In my first week, I found that my vision over distance was at least as good as with contacts and glasses previously, probably better. No discomfort or pain. Initial sensitivity to light went quickly too.

Encouraged, a week later I returned for my one-week check-up. My eyes were a little worse than after a day. I was told this was normal. There was a slight inflammation in one eye and they were both dry. I continued using the drops.

A further week later the inflamation had cleared up and all was fine, apart from a little dryness. I kept using standard “blink” eye drops a few times a day for two further weeks. I still use them for comfort occasionally, although I could live without them.

Approximately six months later my vision is great, even at night. I’ll return regularly for check-ups to look for any long-term changes.

I’m very pleased with the results from the surgery. I wish I’d done it sooner. Yes, there’s a lot of upheaval, drops, glasses-wearing, check-ups and expense, but I think it was worth it. Waking up in the morning, opening your eyes and seeing perfectly still makes me smile.

The total cost is expensive, but you can pay in installments if that helps. I was paying £360/year in daily disposable contacts plus more in glasses so I estimate it will take five years to cover the cost. That doesn’t take in account the time-saving and convenience every morning and night.

If you’re considering it, speak to a professional and if it’s right for you, go for it. Really. Don’t put it off. I’d be happy to answer any questions you might have: ping me on Twitter.